Okay, let’s change gears a bit and discuss one of our most familiar scaly faces, Sceloporus occidentalis, the Western Fence Lizard. These spiky little lizards can be found just about anywhere, including courtyards and city parks. They’re insectivorous, meaning they feed primarily on insects; larger males will, however, eat smaller lizards on occasion, even those of their own species! They are also important prey items for many species, including raptors and snakes. Western fence lizards can show a bit of variety in their behavior and coloration based on gender. The most striking differences in coloration occurs within the breeding season from March – June; during this time, males love to strut their stuff, showing off beautiful colors and performing physical ‘push-up’ displays to intimidate rival males and impress nearby girls. Male Western fence lizards, such as the one seen here, can have beautiful flecks of cyan on their dorsal scales. Let’s take a closer look: 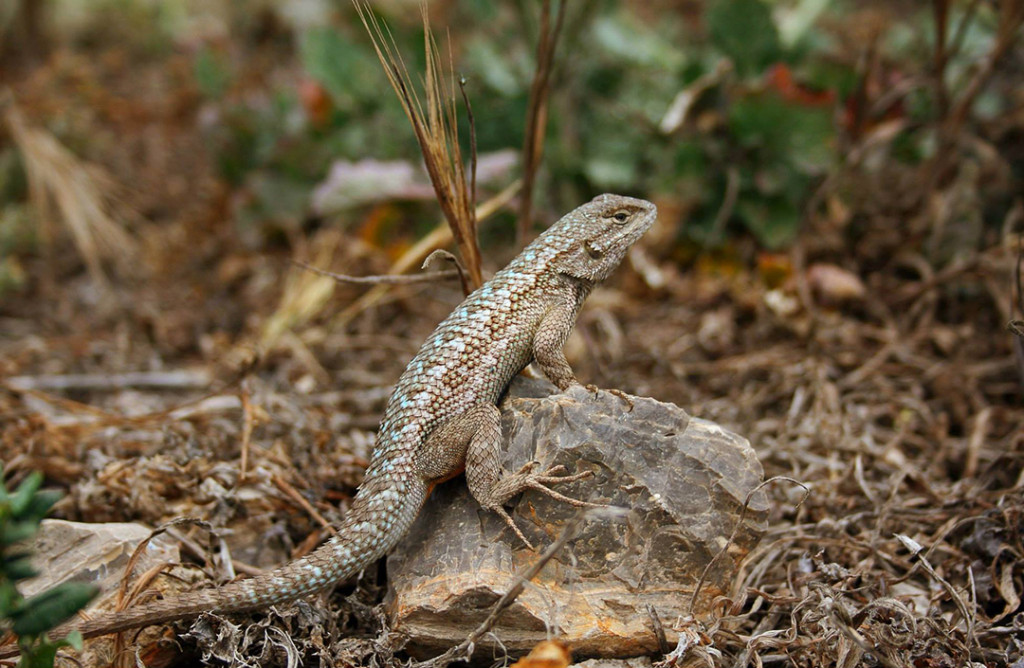 Here we can fully appreciate the dapper of a male Western Fence Lizard; just get an eye-full of that green! 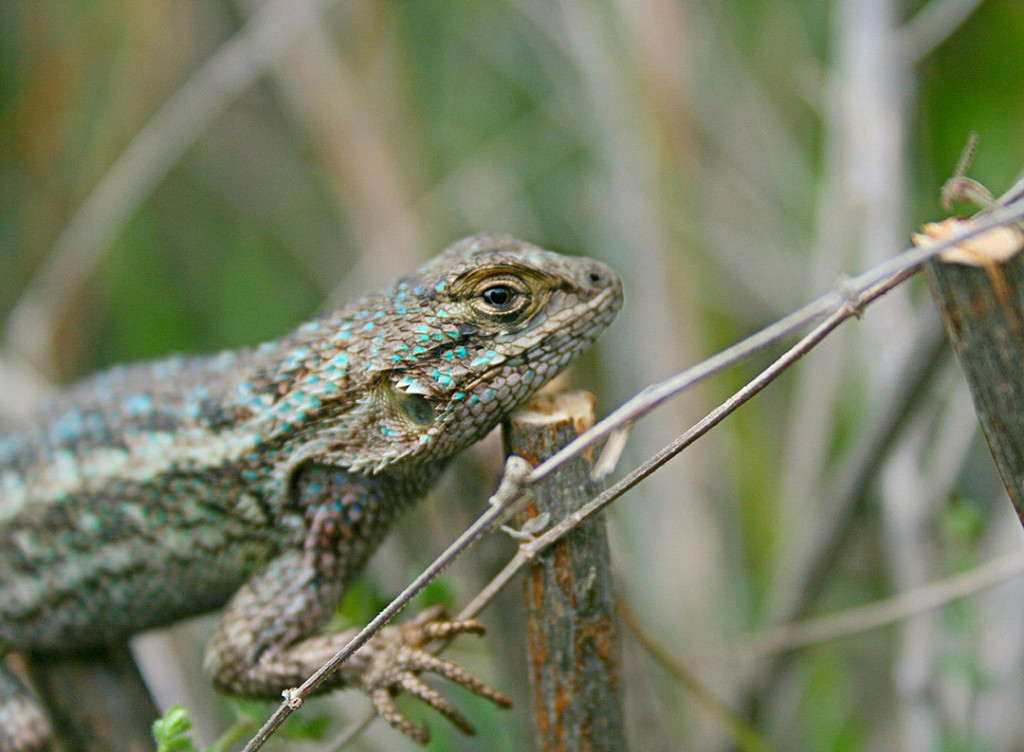 Now let’s take a look at the females: Female fence lizards tend to have a ‘dainty’ build when compared to the rather robust build of males and have a somewhat discreet pattern of dark, horizontal waves on the dorsum (back). 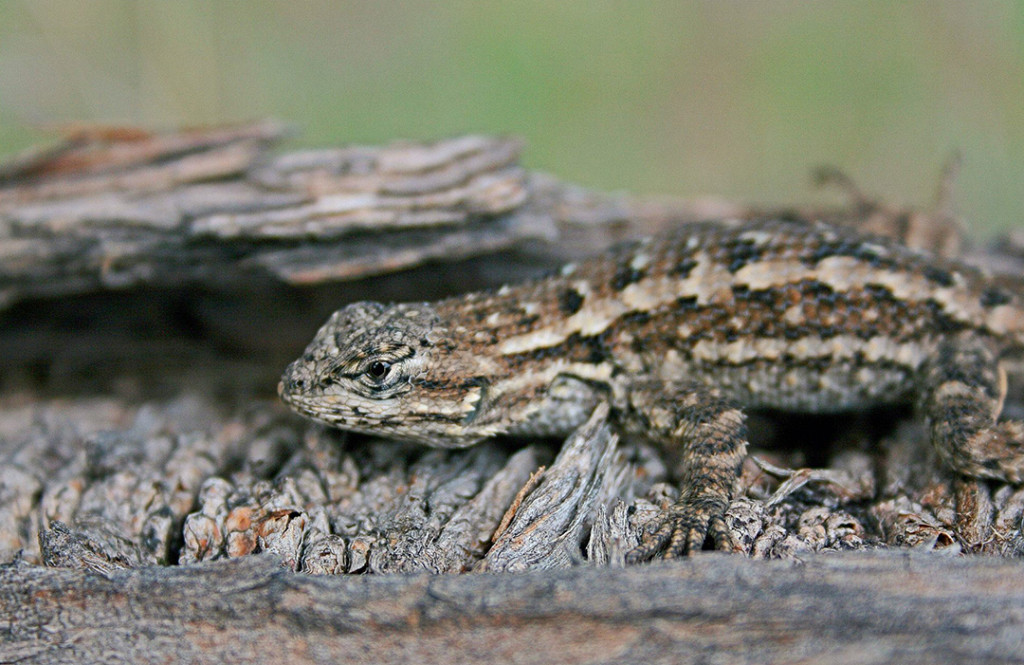 A different female: Female Western fence lizards typically lay 1-3 clutches of 3-17 eggs that hatch after 60 days. Since Spring was the mating season, baby fence lizards should be making an appearance soon! Keep an eye out! 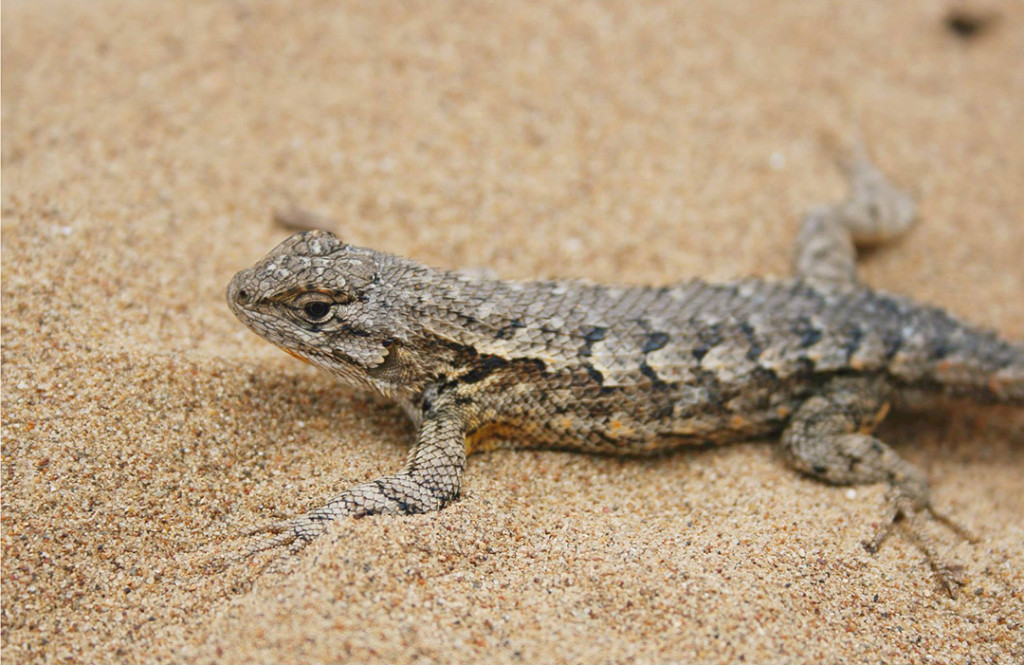 Let’s look at other ways males can be distinguished from females: One of the most obvious visual differences occurs on the belly. The male, seen on the left, has areas of striking metallic blue on the lateral margins of the belly (2) and in the gular (chin) area (3)- hence the ‘blue belly’ moniker that is often applied to Western Fence lizards. Additionally, males will have more yellow in the thigh area and rather prominent femoral pores (1). These femoral pores secrete a waxy substance that is used to mark territory.The female, seen on the right, has greatly reduced blue markings (2,3) and much smaller femoral pores (1).

Let’s have another look at those femoral pores and genital area: Within the blue box one can see a small, horizontal row of dots; these are the femoral pores. Notice the difference in prominence when compared to the female (pink borders). Also, take a look at the tail – notice the male has a thicker tail that bulges on either side (blue dots). These are the hemipenal bulges; they are absent in the females.
Next time we’ll take a look at another somewhat common species of lizard – and discuss a really neat defense mechanism!